VANCOUVER, B.C. – September 4, 2013 – August activity in the Greater Vancouver housing market finished well above last year’s pace and slightly below the 10-year average for the month.

Last month’s sales were 4.6 percent below the 10-year sales average for the month. “We’ve seen a healthy amount of demand in the marketplace this summer compared to the number of homes listed for sale,” Sandra Wyant, REBGV president said. “The market today is much stronger than we saw last year and is consistent with our long-term averages for this time of year.”

New listings for detached, attached and apartment properties in Greater Vancouver totalled 4,186 in August. This represents a 3.5 percent increase compared to the 4,044 new listings reported in August 2012 and a 13.8 percent decline from the 4,854 new listings in July of this year.

The total number of properties currently listed for sale on the MLS® in Greater Vancouver is 16,027, which is an 8.8 percent decrease compared to August 2012 and a 3.6 percent decline from July 2013.

“People entering the market should not confuse stronger sales activity with rising prices. Home prices have been quite stable and consistent for much of this year,” Wyant said.

The MLS® Home Price Index composite benchmark price for all residential properties in Greater Vancouver is currently $601,500. This represents a 1.3 percent decline compared to August 2012 and an increase of 2.3 percent since the beginning of 2013. 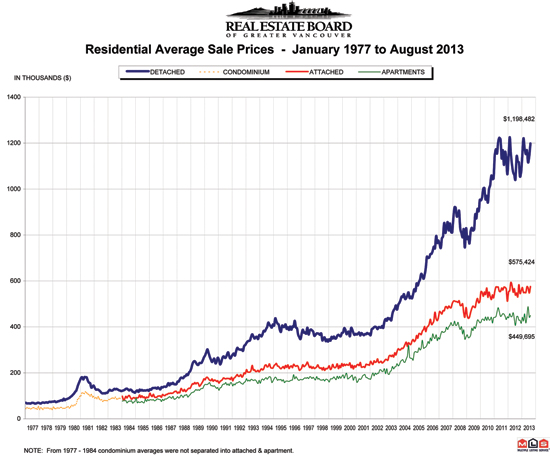