VANCOUVER, B.C. – December 3, 2013 – Consistent home sale and listing activity has allowed balanced market conditions to prevail in the Greater Vancouver housing market for most of 2013.

The Real Estate Board of Greater Vancouver (REBGV) reports that residential property sales in Greater Vancouver reached 2,321 on the Multiple Listing Service® (MLS®) in November 2013. This represents a 37.7 percent increase compared to the 1,686 sales recorded in November 2012, and a 12.8 percent decline compared to the 2,661 sales in October 2013.

Last month’s sales were 1.2 percent below the 10-year sales average for the month, while new listings were 1.5 percent above the 10-year November average.

“We’ve seen steady and consistent trends the Greater Vancouver housing market for much of this year,” Sandra Wyant, REBGV president said. “This year’s activity has resulted in gradual and modest increases in home prices of approximately one percent over the last 12 months in the region.”

The total number of properties currently listed for sale on the MLS® in Greater Vancouver is 13,986, a 10.9 percent decrease compared to November 2012 and an 8.3 percent decline compared to October 2013.

The sales-to-active-listings ratio currently sits at 16.6 percent in Greater Vancouver.

The MLS® Home Price Index composite benchmark price for all residential properties in Greater Vancouver is currently $603,000. This represents a 1 percent increase compared to November 2012. 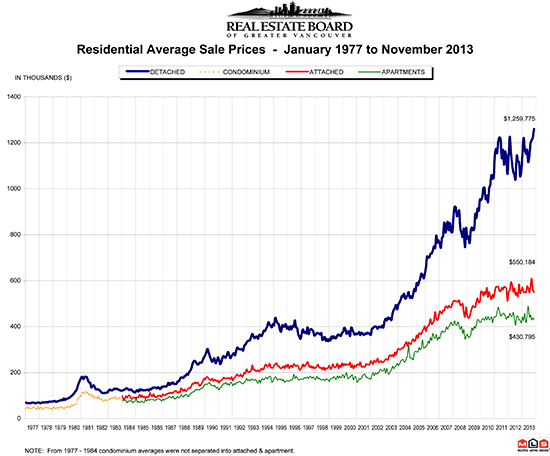