VANCOUVER, BC – November 2, 2017 – Metro Vancouver* home sales exceeded typical historical levels in October with the majority concentrated in the townhouse and apartment markets.

The Real Estate Board of Greater Vancouver (REBGV) reports that residential property sales in the region totalled 3,022 in October 2017, a 35.3 percent increase from the 2,233 sales recorded in October 2016, and an increase of 7.1 percent compared to September 2017 when 2,821 homes sold.

"Conditions continue to vary significantly based on property type. The detached home market is well supplied with homes for sale, which is relieving pressure on prices," Jill Oudil, REBGV president said. "It remains a much different story in the townhouse and apartment markets. Buyers of these properties continue to have limited supply to choose from and are seeing upward pressure on prices."

There were 4,539 detached, attached and apartment properties newly listed for sale on the Multiple Listing Service® (MLS®) in Metro Vancouver in October 2017. This represents a 14 percent increase compared to the 3,981 homes listed in October 2016 and a 15.6 percent decrease compared to September 2017 when 5,375 homes were listed.

For all property types, the sales-to-active listings ratio for October 2017 is 33.1 percent. By property type, the ratio is 16.8 percent for detached homes, 44.8 per cent for townhomes, and 66 percent for condominiums.

"The growth in our provincial economy and job market is contributing to today's demand," Oudil said. "The federal government's announcement of plans to tighten mortgage requirements for the seventh time in the last eight years also helped spur activity in the short term. Many buyers are trying to enter the market before the changes are in place."

The MLS® Home Price Index composite benchmark price for all residential properties in Metro Vancouver is currently $1,042,300. This represents a 12.4 percent increase over October 2016 and a 0.5 percent increase compared to September 2017. 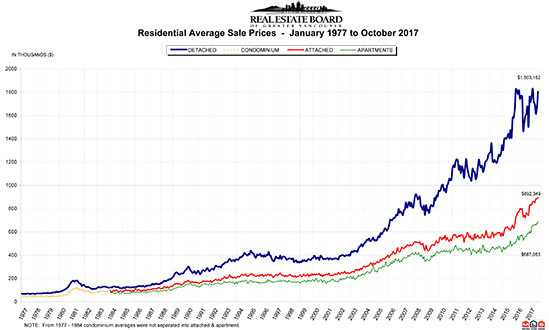