The Real Estate Board of Greater Vancouver (REBGV) reports that residential home sales in the region totalled 2,795 in November 2017, a 26.2 percent increase from the 2,214 sales recorded in November 2016, and a 7.5 percent decrease compared to October 2017 when 3,022 homes sold.

“While we’re seeing more listings enter the market today than we saw at this time last year, we have a long way to go before our home listing inventory rises back to more historically typical levels,” Oudil said.

Generally, analysts say that downward pressure on home prices occurs when the ratio dips below the 12 percent mark for a sustained period, while home prices often experience upward pressure when it surpasses 20 pecent over several months.

The MLS® Home Price Index composite benchmark price for all residential properties in Metro Vancouver is currently $1,046,900. This represents a 14 percent increase over November 2016 and a 0.4 percent increase compared to October 2017. 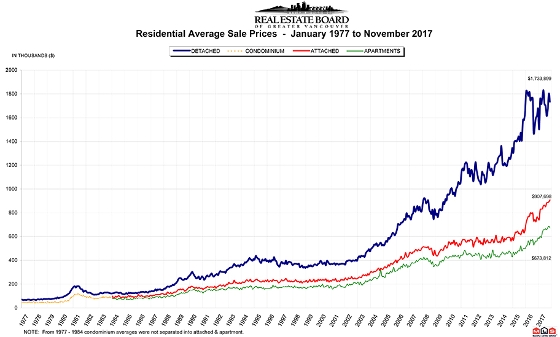