Last month’s sales were 0.1 percent above the 10-year sales average for the month.

“Demand has strengthened in our market in the last few months, which can, in part, be attributed to pent-up demand from the slowdown in sales activity we saw at the end of last year,” Sandra Wyant, REBGV president said.

New listings for detached, attached and apartment properties in Greater Vancouver totalled 4,854 in July. This represents a 1.1 percent increase compared to the 4,802 new listings reported in July 2012 and a 0.4 percent decline from the 4,874 new listings in June of this year.

The total number of properties currently listed for sale on the MLS® in Greater Vancouver is 16,618, which is an 8.1 percent decrease compared to July 2012 and a 3.9 percent decline from June 2013.

The MLS® Home Price Index composite benchmark price for all residential properties in Greater Vancouver is currently $601,900. This represents a decline of 2.3 percent compared to this time last year and an increase of 2.3 percent over the last six months.

“Home prices continue to experience considerable stability with minimal fluctuation throughout much of this year,” Wyant said. “This stability in price brings greater certainty to the home buying and selling process.” 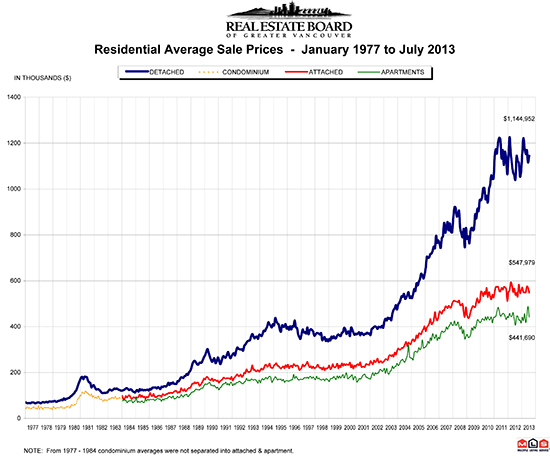