Last month’s sales were 7.6 percent below the 10-year sales average for the month.

“While 2016 has been anything but a normal year for the Metro Vancouver housing market, supply and demand totals have returned to more historically normal levels over the last few months,” said Dan Morrison, Real Estate Board of Greater Vancouver (REBGV) president.

New listings for detached, attached and apartment properties in Metro Vancouver totalled 3,147 in November 2016. This represents a decrease of 20.9 percent compared to the 3,981 units listed in October 2016 and a 7.2 percent decrease compared to November 2015 when 3,392 properties were listed.

The sales-to-active listings ratio for November 2016 is 26.4 percent. This is up two percent from last month (24.4 percent).

The MLS® Home Price Index composite benchmark price for all residential properties in Metro Vancouver is currently $908,300. This represents a 1.2 percent decrease compared to last month and a 20.5 percent increase compared to November 2015. 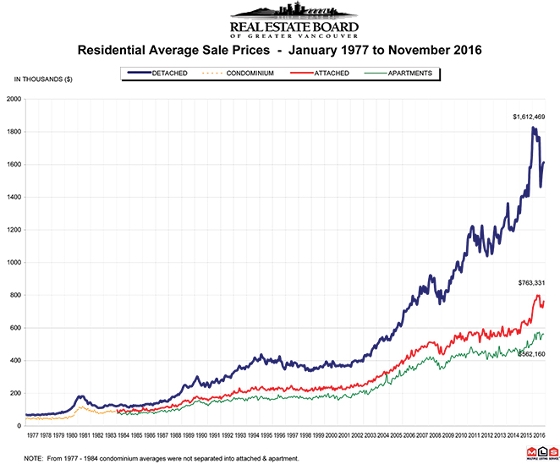