“Changing market conditions compounded by a series of government interventions this year have put home buyers and sellers in a holding pattern,” Dan Morrison, Real Estate Board of Greater Vancouver (REBGV) president said. “Potential buyers and sellers are taking a wait-andsee approach to try and better understand what these changes mean for them.”

New listings for detached, attached and apartment properties in Metro Vancouver totalled 3,981 in October 2016. This represents a decrease of 3.5 percent compared to the 4,126 units listed in October 2015 and a 17 percent decrease compared to September 2016 when 4,799 properties were listed.

The sales-to-active listings ratio for October 2016 is 24.4 percent. Generally, analysts say that downward pressure on home prices occurs when the ratio dips below the 12 per cent mark for a sustained period, while home prices often experience upward pressure when it surpasses 20 percent over several months.

“While sales are down across the different property types, it’s the detached market that’s seen the largest reduction in home buyer demand in recent months,” Morrison said. “It’s important to work with your local REALTOR® to help you navigate today’s changing trends.”

The MLS® Home Price Index composite benchmark price for all residential properties in Metro Vancouver is currently $919,300. This represents a 24.8 percent increase compared to October 2015 and a 0.8 percent decline compared to September 2016. 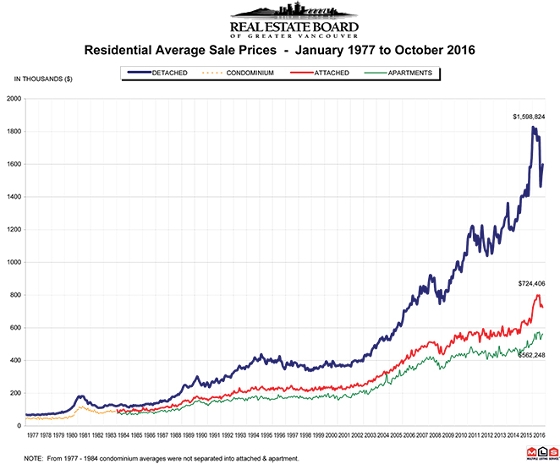