The sales-to-active-listings ratio currently sits at 18.2 percent in Greater Vancouver, which is unchanged from last month.

“We continue to see steady and stable market conditions across the Greater Vancouver housing market,” said Ray Harris, REBGV president. “There has been a consistent balance between home seller supply and home buyer demand in our marketplace over the last year.”

The total number of properties currently listed for sale on the Greater Vancouver MLS® is 14,472, a 6.4 percent decline compared to March 2013 and a 7.9 per cent increase compared to February 2014.

“Home prices in the region have experienced incremental gains in most areas and property types over the last 12 months,” Harris said. “It’s important to remember that this is a diverse marketplace and trends will vary depending on area and property type.”

The MLS® Home Price Index composite benchmark price for all residential properties in Metro Vancouver is currently $615,200. This represents a 3.7 percent increase compared to March 2013. 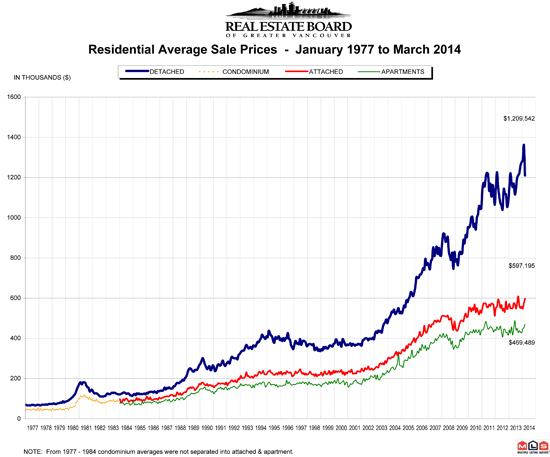