VANCOUVER, BC – February 2, 2018 – Attached and apartment homes are in demand across Metro Vancouver* while detached home buyers are facing less competition today.

“Demand remains elevated and listings scarce in the attached and apartment markets across Metro Vancouver,” Jill Oudil, REBGV president said. “Buyers in the detached market are facing less competition and have much more selection to choose. For detached home sellers to be successful,it’s important to set prices that reflect today’s market trends.”

There were 3,796 detached, attached and apartment properties newly listed for sale on the Multiple Listing Service® (MLS®) in Metro Vancouver in January 2018. This represents an 8.3 percent decrease compared to the 4,140 homes listed in January 2017 and a 100.7 percent increase compared to December 2017 when 1,891 homes were listed.

For all property types, the sales-to-active listings ratio for January 2018 is 26.2 percent. By property type, the ratio is 11.6 percent for detached homes, 32.8 per cent for townhomes, and 57.2 percent for condominiums.

The MLS® Home Price Index composite benchmark price for all residential homes in Metro Vancouver is currently $1,056,500. This represents a 16.6 percent increase over January 2017 and a 0.6 percent increase compared to December 2017. 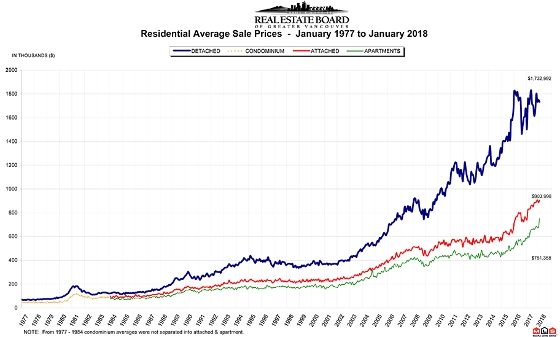