Vancouver, B.C. – December 4, 2012 – Over the past six months, the Greater Vancouver housing market has seen a reduction in the number of homes listed for sale, a gradual moderation in home prices and a decrease in property sales compared to historical averages.

The Real Estate Board of Greater Vancouver (REBGV) reports that residential property sales of detached, attached and apartment properties reached 1,686 on the region’s Multiple Listing Service® (MLS®) in November, a 28.6 percent decline compared to the 2,360 sales in November 2011 and a 12.7 percent decline compared to the 1,931 home sales in October 2012.

At 15,689, the total number of residential property listings on the MLS® increased 13 percent from this time last year and declined 9.7 percent compared to October 2012. Total listings in the region have declined by nearly 3,000 properties since reaching a peak of 18,493 in June.

The region’s sales-to-active-listings ratio was unchanged from October at 11 percent.

“Home prices in Greater Vancouver have generally declined between three and five and a half percent, depending on property type, since reaching a peak six months ago,” Klein said. “Changes in home prices vary per municipality and neighbourhood. It’s good to check local market statistics with your REALTOR®.”

Since reaching a peak in May of $625,100, the MLS® Home Price Index composite benchmark price for all residential properties in Greater Vancouver has declined 4.5 percent to $596,900. This represents a 1.7 percent decline when we compared to this time last year. 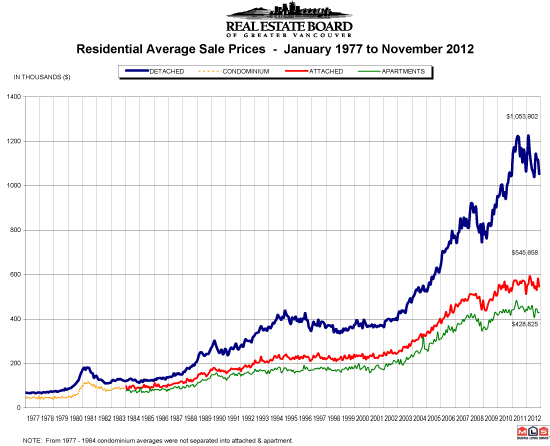